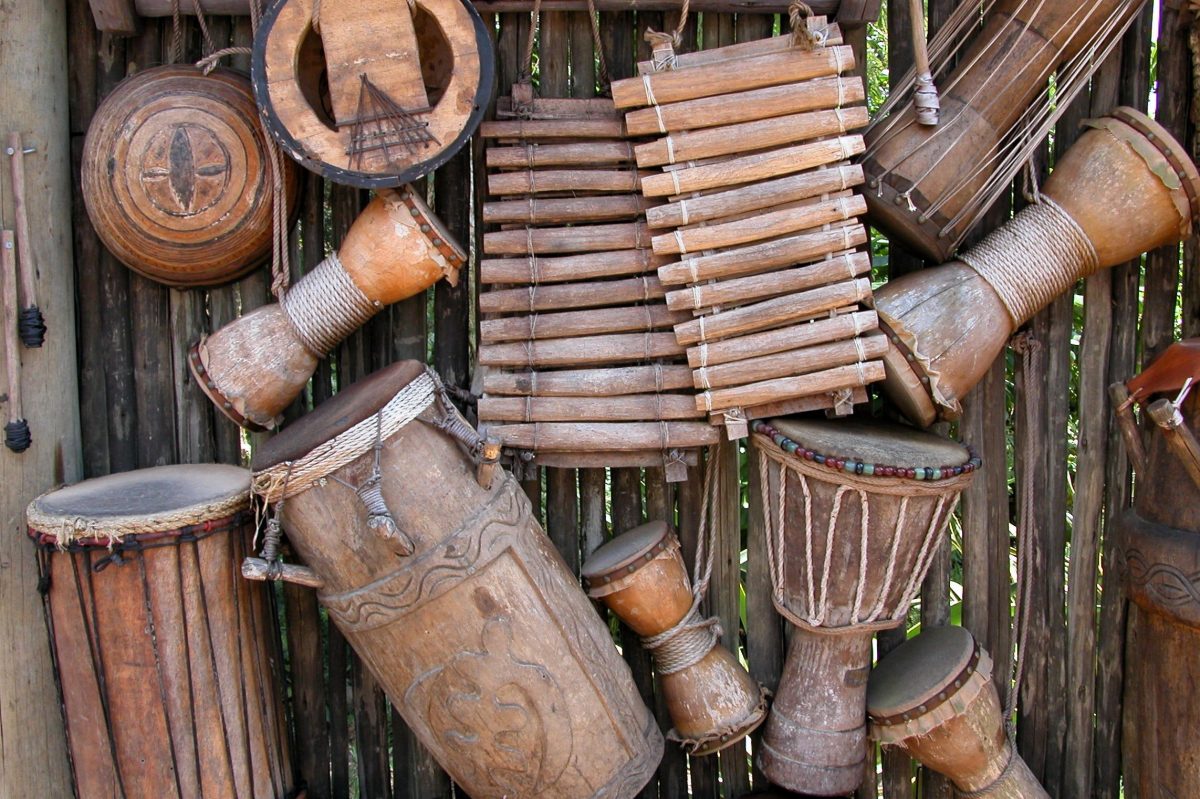 Membranophone, first created in 1927, categorizes musical instruments that produce sound with a vibrating stretched membrane with a vast variety in shapes such as cylinder and vessel. This systematic hierarchy of classification created the family employing membrane for sound production and continuously expands through ages and across countries. Knowledge about membranophone not only enriches one’s personal interests and skills in music but also promotes cultural exchanges through sound and rhymes, connecting the world without words.

Mali – Djembe is a roped-tuned skin-covered goblet drum From West Africa. Its name is thought to come from a Malian phrase of the Bambara meaning ‘ to gather in peace’. Made from a hollow piece of hardwood with a goatskin head, Djembe has become popular all over the world with artists playing in their shows. The person who plays Djembe is called “Djembefola”.

Nigeria – Bata is a double-headed drum that is an important part of religious ceremonies practiced by Yoruba people of Nigeria, West Africa, and their descendants in Brazil and Cuba. The Bata is shaped like an hourglass with one side larger than the other. A trio of Bata Drums was traditionally made from the same tree and tuned to different pitches. It is closely associated with the religious ceremonies of Santeria where complex polyrhythmic compositions are being played by Bata.

Mali – Dunun is an onomatopoeic word given to a variety of traditional barrel drums which spread throughout West Sub-Saharan. The skin of cow or goat is used at either end of the rope-tuned cylindrical drum. It is struck with a plain straight stick and played to provide the rhythmic and melodic base for Djembe ensembles.

Argentina – Bombo Drum is traditionally made from a hollowed tree trunk and has a drum head made from animal hide, which gives the drum its characteristic deep sound. The Bombo Drum is often found accompanying the zampogna or the quena in music native to the Andes.

Brazil – Cuica is a Brazilian friction drum commonly used in Samba music. By changing the tension of the drum head by pressing on the skin, a large pitch range of sounds can be generated likened to that of a monkey. Cuica is also the Portuguese name for the small marsupial called an opossum which has a high pitched cry.

Brazil – The Surdo is a large double-headed bass drum used in Brazilian musical genres such as samba. It is worn around the waist so it can be played while walking. It is played in parades such as the famous Carnivale in Rio de Janeiro and is commonly heard at football matches.

Brazil – Tan-tan is a cylindrical hand drum from Brazil that is used in small samba and pagode ensembles. It imitates the sound of a surdo, which is played by famous samba bateria  (a form of Brazilian samba band).

Brazil – Bongos are a pair of small handheld drums. They originated in Cuba where they are used in Latin-American dance bands, rumba bands, and jazz and pop bands. Bongo is beaten with the bare hands and its playing styles reach a high level of virtuosity and complexity.

Brazil – The Pandeiro is a handheld frame drum popularized in Brazil. It is derived from various Arabic tambourines that made their way to Portugal in the medieval era and were then taken to South America. It is used in many styles of music as well as an accompaniment to the Brazilian martial art “Capoeira”.

The United States – Brake Drum is from a car. It is the major part of the braking system known as a ‘drum brake’, which brake pads push out against causing friction to slow down or bring the car to a stop. In musical terms, the Brake Drum is similar to the sound of the Anvil and is often used as a substitute in orchestras. Lou Harrison and John Cage both used the Brake Drum.

The United States – The Native American Hand drums come in a variety of types and with the most common type as a double-sided hoop drum. In general, this instrument can be played by spinning the pole so that it is an amusing instrument to make people relax.

The United States – The native American ceremony drum is usually used in some local festivals such as Pow Wow in the United States. It often has two genres: hand drums and frame drums. The ceremony drums can be played by one person or in groups so the size of the drums depends on the amount of the player.

Japan – Taiko Drum refers to any kind of drum and can also refer to the performance itself often referred to Kumi-Daiko. Taiko requires great physical and theatrical energy to play. Throughout history, their function has varied from communication, military action, theatrical accompaniment, and religious ceremony to both festival and concert performances. They vary in size from small to grand sized drums and are played with Bachi (wooden sticks).

Indonesia – Kengand also spelled Kendang, is found in many parts of SouthEast Asia. This double-headed drum comes in different sizes and is made from the wood of jackfruit, coconuts, buffalo hide, and goat-skin for the low and high pitch. It is a primary member of the Gamelan and Kulingtan ensembles.

Myanmar – Pai Waing from Myanmar features a horseshoe or a circle formation of 21 different size drums. A sweet melodic cascading effect of short rhythmic patterns is created when Pai Waing is played with bare hands.

Nepal – Table Nepal is a membranophone percussion instrument originating from India consisting of a pair of hand drums. It is widely used in India, Pakistan, Nepal, as well as Middle Asia.

Pakistan – Hand Drum is a circular frame drum with Zills attached to the rim and is a member of the tambourine family. It is played with fingers and the palm of the right hand, while the left hand supports the Hand Drum. The hand drum is normally made from the wood of jackfruit trees and is used in folk music.

Afghanistan – The tabla is a pair of small singled headed drums. It is used in India, Pakistan, Afghanistan, Nepal, and Sri Lanka. It is most commonly associated with North Indian (Hindustani) classical music but it is also used in popular and folk music. Tabla has its name from the word “tabl” which means drum in Arabic.

Turkey – Tupan (Davul) a large double-headed Drum, is known by dozens of names such as Davul, Tapn, Ataval, and Tabl. A deep bass sound and a thin treble sound is created depending on the sticks used. The Tupan can be found in the Balkans, Western and Central Asia, and in a range of settings including folk and ceremonial music. The Tupan is often heard playing complex polyrhythms and irregular meters which are characteristic features of music from this part of the world.

Turkey – Darbuka/Darbouka, also called Doumbek, is a kind of middle eastern drum that mainly originates in the Middle East and the North African area. Darbuka became very popular throughout the oriental music market in many different countries and is usually played to accompany the belly-dancers.

Turkey – Bass Darbuka Tsifteteli. This is the lower-pitched Darbuka which is a drum found in the Middle East and North African. It is usually played to accompany the belly-dancers.

Iran – Daf is a large frame drum made from hardwood and metal ringlets attached. The skin is normally made from one of the following animals: goat, fish, cow, and horse. The Daf is used in a variety of settings including traditional, classical, and spiritual music, and often used to accompany poets.

Iraq – Riq is a frame drum that is both a classical and folk instrument throughout the Arabic world. It is also called a Tef and is often used in drumming ensembles accompanying instruments like the darbuka and daf. Players use a combination of complex techniques to create its unique rhythmic texture. Its presence in ancient artworks indicates that the riq could be thousands of years old.

With an in-depth exploration with the membranophones family, it is certain that music strengthens the connectedness around the world as it serves as a medium for people to get to know each other and more passionate about sharing knowledge, lives, and culture. Learn more on the Sound Infusion website.